Control Is The New Dreamcatcher. 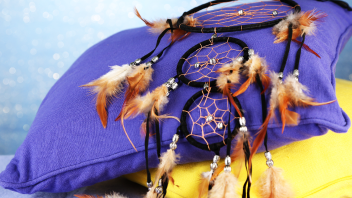 Back in the ancient times, the dreamcatcher was a whimsical charm in any person’s home. Now at present, humankind had come a long way from just catching bad dreams.

It was first believed that dreamcatchers traced its origins to the Ojibwe people, a native American tribe residing in most parts of North America. According to Ojibwe legends, Asibikaashi, who was widely known in their tribe as The Spider Woman, took great care of all the Ojibwe infants and adults with all her heart. But this well-meaning act soon proved to be difficult to do so, as the Ojibwe people spread far and wide across nations.

To extend a helping hand to her, the Ojibwe women started weaving magical webs for all the children. The webs were hung above the little ones’ beds, and were believed to catch all the bad dreams and harm that might come to the sleeping child.

Millions of years after, mankind has long surpassed the idea of catching just the bad dreams.

With years of science, the human race discovered that they actually have the power to take control of their dreams—turning their nightmares into empowering dreams where they win over their fears and worries.
Certainly, it is a fascinating and rejuvenating experience to become the master of our dreams. But can we still say the same thing if someone else controls our dreams, without us ever knowing it?

Dreamtech advertising sounds like a concept out of a sci-fi movie. But believe it or not, recent marketing studies are already exploring how to alter consumer behavior by influencing a customer’s dream.

In fact, a study from the American Marketing Association New York’s 2021 Future of Marketing showed that 77% out of 400 marketers already intend to use dream technology for their advertising campaigns in the next three years.

So how does this strategy actually work? Dreamtech advertising can be accomplished through a process called Targeted Dream Incubation (TDI).

This method enables scientists to guide a person’s dreams to specific themes. To do this, the scientists must study which phases of a person’s sleeping pattern would be easier to influence or alter.

Recent findings suggest that hypnagogia, the state between being awake and asleep, is the best time to introduce content, with audio and visual stimuli being effective entries to the customer’s dream.

But Has Anyone Ever Tried It?

Molson Coors, Burger King, and Microsoft’s Xbox were among the brands who have experimented the idea of dreamtech advertising.

In 2018, Burger King made a sandwich called the Nightmare King, which they claimed was clinically proven to induce nightmares to anyone who ate the product. The fast-food company even partnered with sleep and neurological diagnostic centers to prove their point. And through a study, data showed that nightmares increased by 3.5 times for people who ate the Nightmare King.

In 2020, Microsoft Xbox showcased a short film that centered on a video gamer’s dream. It justified the assumption that video gamers really dreamt of the games they have played during the day. The film’s content was acquired through Microsoft’s sleep experiment. Gamers played the Xbox Series X before sleeping in a lab to have their brain activity recorded, while scientists talked to them during hypnagogia.

But the most recent attempt that brought significant attention was the Coors commercial in 2021. The beverage corporation Molson Coors did the Coors Dream Project, where the target audience watched the Coors commercial for three times before falling asleep. Study results showed that 5 out of 18 participants dreamt of the product, but these results were met with criticism since 12 participants are said to be paid actors.

We live in an era where data consent and privacy are essential for every customer.

With marketers possibly influencing dreams—a private and personal phenomena—sleep and dream researchers are only right to raise ethical concerns on the matter.

Dreams, as explained by scientific experts from Harvard and MIT, are not random neural activities that occur during sleep. Instead, they are our brain’s evolving mechanisms to map significant memories throughout our lifetime, and help us to make decisions throughout the day. With targeted information influencing dreams, the brain might make biased decisions.

What is more disturbing is that the person may not be aware that their dreams had been targeted or altered already.

For example, a dream incubation study showed that mixing unpleasant smells with cigarette smoke while smokers slept has significantly reduced their smoking habits on the following day. However, the participants claimed that they don’t recall smelling anything.

But don’t get it wrong. The scientists were not exactly bent on destroying or stopping dream technology from happening. Despite the ethical concerns surrounding dream incubation, researchers are still in favor of exploring this technological advancement. After all, dream incubation has its benefits, particularly on overcoming addictions.

It is just that with dream technology’s powerful capabilities, scientists are adamant about implementing protocols on its creation and usage—in the same way that authorities have strictly and rightfully regulated AI and other emerging technologies to avoid unethical practices over the past years.